Woking School will close at end of 2020-21 school year 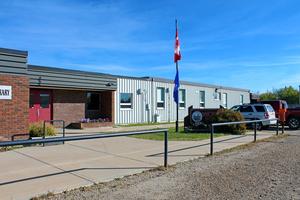 The Board meeting at PWPSD Central Office on April 29, 2021 signaled the end of an era of education for the Woking area when the Board unanimously voted to close Woking School at the end of the current 2020-21 school year.

Grande Prairie, AB – The Board meeting at Peace Wapiti Public School Division (PWPSD) Central Office on April 29, 2021 signaled the end of an era of education for the Woking area when the Board unanimously voted to close Woking School at the end of the current 2020-21 school year, following the Notice of Motion announced on March 25.

“This is a sad day for PWPSD and the community of Woking, but we have made this decision in the best interest of the students,” said an emotional Kari Scheers, PWPSD Board Chair and Trustee for Ward 1 – Eaglesham, Rycroft, Woking.

“Since becoming a Trustee, I have seen a decrease in student population at Woking School, including this year with only one student enrolled in Grade 8. I believe Woking has the best teachers and administration, but they are already pushed to do more with less, including triple grading some subjects. With the threat of quadruple grading looming for next year due to low student enrolment and decreases to their budget, I believe the best decision for the students is to move them to one of the nearby schools where they will receive a more equitable education and be in classrooms with more peers.”

In terms of the Weighted Moving Average – the funding provided by Alberta Education – Woking School was projected to drop below 35 students next year, resulting in a decrease in revenue of more than $210,000.

This information was included among a data-filled Woking School Status Report that was mailed to parents/guardians, school staff, community members and municipal offices on February 19. PWPSD invited feedback until March 24.

The original Woking School facility was built in 1949 to suit 25 students and consisted of a single classroom and a library. The school saw additions in 1952, 1955, 1958 and 1962. A modernization project in 1982 included a gym addition. By 2010, the school was 44 per cent utilized with an enrolment of 60 students. The current school capacity can accommodate 116 students. Enrolment was projected to drop to fewer than 35 students in the 2021-22 school year.